Can You Stop Phishing Emails?

I’ve been talking a lot about phishing emails lately. The reason I’ve done that is because I don’t want people to become a victim of them as it’s so easy to do. I recently talked about a few phishing emails that I received, two of which were PayPal phishing emails and one of them supposedly from Apple.

I took a look at the red flags that these emails have as well as what could happen if you click the links inside of those emails. The first PayPal phishing scam in which I clicked the link inside of it, started to take me to what would’ve been a phishing website, but I got a red screen pop up instead warning me that the site was more than likely a phishing attempt and is very dangerous. You can read all about that by clicking here.

With all the phishing emails I’ve received lately as well as countless other people receiving them in their email inboxes, the question that might be asked is can you stop phishing emails? Well I’m going to take a closer look at that and talk about the best defense against them. I’ll also show a couple of other phishing email scams that I received.

Can You Stop Phishing Emails?

That is a very big question. I know that I tend to receive a lot of them and I’m sure a lot of people reading this do too. Unfortunately, there’s just not a surefire way to completely stop receiving these types of fraudulent emails. Your email address can very easily be found online or sold and so it’s a great way for scammers to try to use as many emails as possible to try to scam someone.

There are some things that you can do to try to prevent your email address from being a target to send phishing scams to, but again, it’s not a 100% way to completely keep them from coming. A lot of places want you to sign up for things such as offers, newsletters, promotions, and other things, but that’s also a way for your email address to get around to other places that you may not have intended for.

You want to try to limit the amount of places that you use your email address as that will also limit the chance that your email will be shared by other 3rd parties or sold to them. Again though, it won’t completely stop you from being targeted from phishing scams so then you want to have a good defense against them so that you never become a victim if and when you receive them in your inbox.

It seems that PayPal phishing scams are the most prevalent one’s making their way into inboxes and I can understand why. Since PayPal is a financial company that deals with transfers of money, it’s understandable why scammers prefer them over a lot of other companies, but that doesn’t mean that they won’t try to spoof other one’s as well, as I’ve received phishing scams that claim to be from Apple, Amazon, and Netflix, just to name a few. I’ve also received some claiming to be from reputable cryptocurrency companies, but upon clicking the link inside the email, I quickly get a warning that it is a phishing site designed to steal my data.

This particular phishing email was received in my inbox two days ago. At first glance, it tried to make me think it was really from PayPal because the name or initial email address that you see to the left of the email header, said service@paypal.com. Now PayPal does send out legitimate emails that do say service@paypal.com, but that is only to inform you of a very recent transaction on your PayPal account.

In this case, the email header says that my account has been suspended and then it’s followed by some kind of reference number that’s in parenthesis. Now I’ve said this before in my past articles, but PayPal will never send an email like that about your account being suspended, at least not in that fashion. 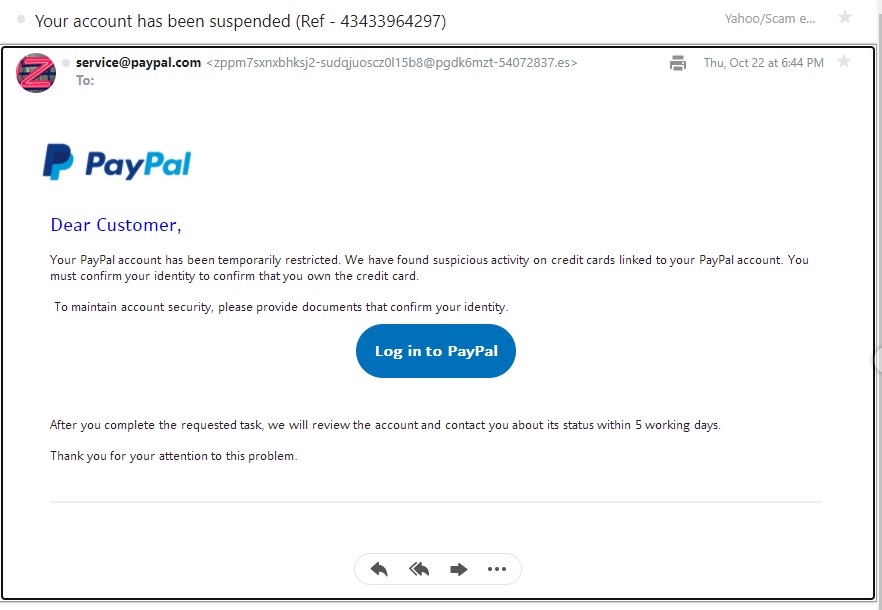 Now when I click open the email, it addresses me as Dear Customer. If I have an account with PayPal, why wouldn’t they at least address me by my first name? That’s one big red flag right there and so I already know that this email is a scam. Still, I want to read on just to see what it says is supposedly wrong with my account.

It says that my account with PayPal has been temporarily restricted because they’ve found suspicious activity on credit cards linked to my account. They want me to log in to confirm my identity so that I can confirm that I own the credit card. The thing is though, I don’t have any credit cards tied to my actual account and so I found this hilarious, but something seemed very familiar about this email. It’s as if I had seen this EXACT message before. Oh wait a minute, I HAVE!

Back on the 14th of October, I received this exact same message. It had the same email header, the same type of link in the email itself and a reference number in the header though the reference number is different from the one I received a couple of days ago. Also, the email addresses that they came from are different, but they’re both not legitimately from PayPal at all and are instead some long series of numbers and letters.

Now Another red flag I’ve talked a lot about, is not really present here. At times, the scammers will have grammatical as well as spelling errors in these emails. They are getting better at not making those apparent though so you definitely want to be careful. It’s time to take a look at the second email. You’ll see that it’s practically the same thing, but with a kind of oddity to it that I’ve never seen before.

This email was also received the same day as the one I talked about above. It has the same email header as well as the exact same message inside the email. The same type of clickable button is in it and it will try to take you to the same type of fraudulent website.

The thing that makes this phishing email odd though is that it repeats the exact same message right below the initial one that you first see. I’m not really sure why this has happened here and makes me wonder if the scammer made an error when trying to put together this phishing email.

I will have to say though, with this type of error, the scammer definitely gave it away that the email is a fake and should be avoided. The email address it came from is very similar to the other one. It just has a really long series letters and numbers that just don’t make any sense whatsoever. 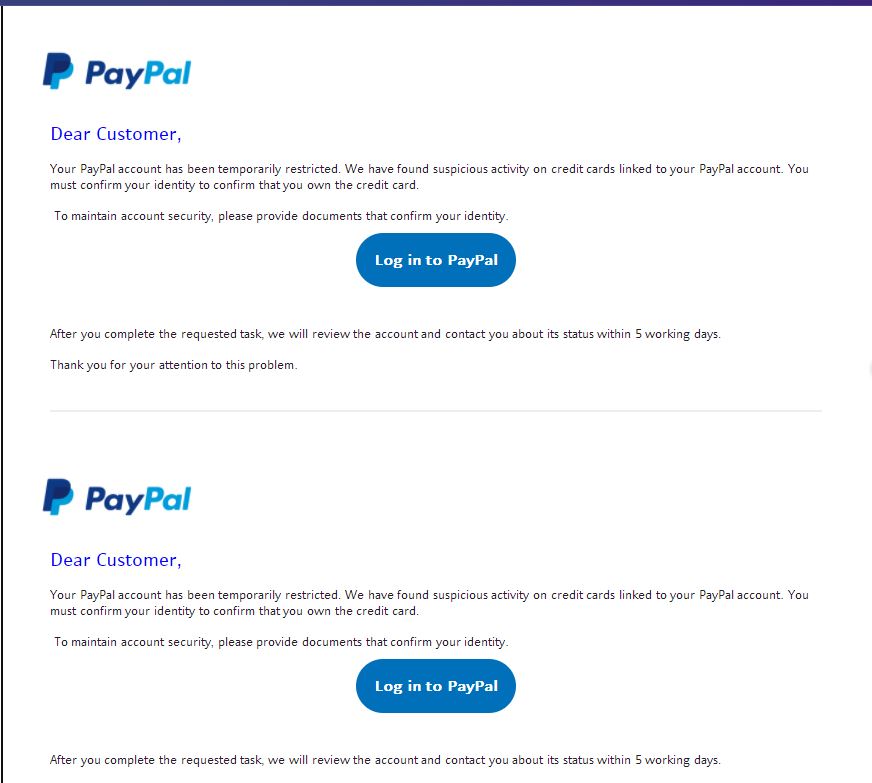 You might ask yourself why they keep sending these type of emails out if it is so apparent that they are not from PayPal? The answer is that there is someone very vulnerable to these types of scams and know that they’ll fall for it. They want you to panic so that you won’t think straight and worry that something is really wrong with your PayPal account.

I’ve said this at times in the past, but if your’re really worried about your PayPal account, just open a separate browser outside of the email and type in the main address of PayPal and log in. You’ll probably find that everything is ok with your account and then realize that the email is trying to scam you. At that point, you have two decisions. You can either delete the email, which is perfectly fine, or you can forward it to PayPal to let them know what kind of scam is out there.

Let PayPal Know What Is Out There

The good news about these kinds of scams that you receive is that you can forward them on to PayPal so that they know what is circulating out there. They don’t want any of their members/customers to become victims of these serious crimes and so they want to be informed of the latest phishing scams out there as well as to let you know what to look for if you do encounter these scams, kind of like what I’m doing right now.

You can click here, which will take you directly to PayPal’s specific page which will show you how to forward suspicious emails to them and let you know about suspicious websites and even text message scams that you need to be aware of. They’ll even show you how you can forward those type of text messages to them if you happen to receive one. 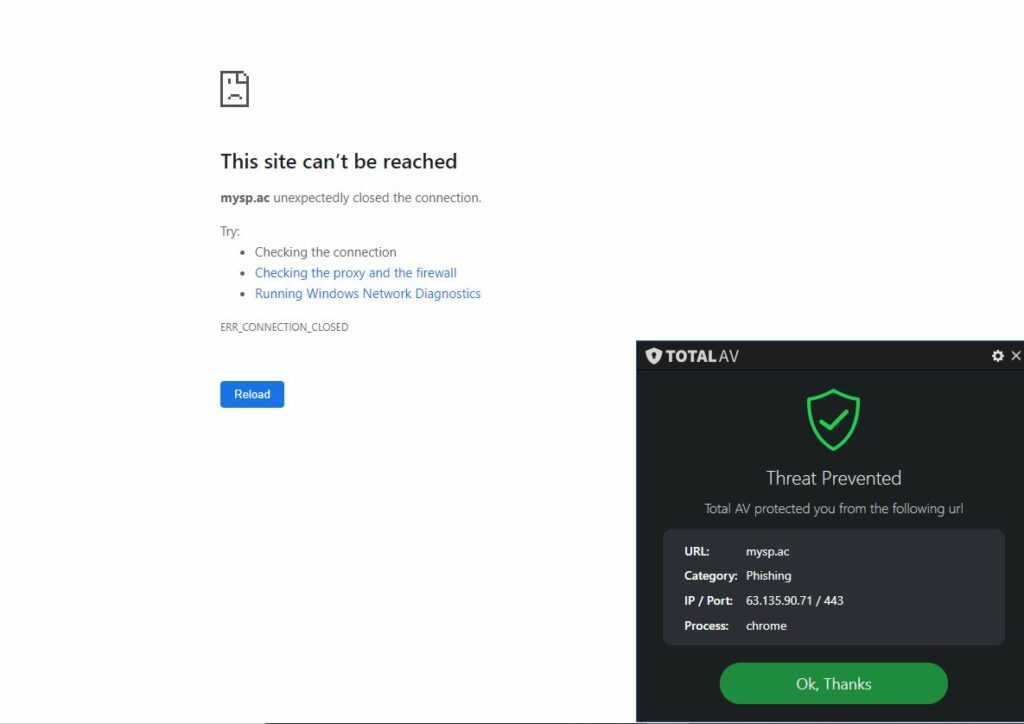 They’ve also got a link on that page that will take you to another page with more information about suspicious emails. It’ll talk about what those type of email try to get from you as well as it’s important to forward those emails on to them because they want to get those shut down as quickly as possible.

I thought it was pretty interesting that they said it’s important to forward those emails to them rather than copy and paste them because they said if you do that, they lose valuable tracking information which they need in order to shut those scams down. They also say that if you’re ever in doubt, don’t hesitate to forward them email to them. It’s better to be safe than sorry.

What Can Happen If You Fall Victim To Phishing

I haven’t always talked a lot about the consequences of falling for these scams, but it does happen and here is what usually happens when you’ve fallen victim. I’ve never fallen fully for a phishing scam, but you need to be aware of what happens.

When I talk about and show these type of fraudulent emails, they usually contain a link to a fraudulent site made to look like the authentic website of the company they’re mimicking. I did give an example of one before it was shut down in a past article which you can read about here.

From there, they could try to pose as you and try to contact your bank to get even more critical information and may try to get your social security number as well as driver’s license number. That’s why it’s important to setup security questions at your bank so that they can verify it’s truly you and not someone else.

I know I might sound like a broken record because of the many times that I’ve talked about fraudulent scams and what to look for, but I want as many people as possible to be aware of these dangerous scams because I don’t want anyone to become a victim of them especially considering the tough times we’re going through right now. Can you stop phishing emails from being received in your inbox? The answer is no, but you now know how to protect yourself from them when they do come in. If you’ve ever received phishing scams before or know someone who has become a victim of them, feel free to post your comments below.

Apple And PayPal Phishing Scams What Is YouGov and Can It Make You Money? My Review