Folks, I’m back with another look at a phishing email I actually received within the last day. This one is gonna be a little different because I’m actually going to show you what a phishing site looks like. A few days ago, I talked about a phishing email scam that I received from Amazon, or at least it appeared to be from them.

Upon further inspection of that email, I showed everyone what to look for and how it was not an authentic email from Amazon and instead actually came from scammers. The link I clicked on inside that email, should’ve taken me to a fraudulent website that was made to look like Amazon’s site, but it appeared to have already been taken down because a 404 error popped up meaning the site was not found.

That’s a very good thing because it means that those particular scammers can no longer take advantage of other people with that type of scam.

Today, you’re going to see a PayPal Phishing Site Exposed. I’ll show you exactly what it looks like and how it’s practically identical to PayPal’s real sign in page. There are a few things that do set it apart from PayPal’s actual page, but you have to look very carefully in order to spot them.

The Phishing Email That Tries To Scare You

I’ve talked about this before in my previous articles, but it’s very important I talk about this because I want people to not be worried when seeing an email such as this.

Typically, PayPal will send you an email that will show service@paypal.com at first glance when you’re going through your inbox. That typically means a transaction has recently happened on your PayPal account. So needless to say when I first saw it, I really thought it was a legitimate email from PayPal.

The thing that tipped me off that this is more than likely a scam is when I noticed the header of the email. It said that my account has been suspended. While I still did not like reading that, I then quickly remembered that PayPal will not usually send emails like that especially when it shows service@paypal.com since this is not a transaction type of email from PayPal.

Like I’ve said before, this is how scammers try to get you because they don’t want you to think logically or look through the clues that the email is fraudulent. If you’re really worried that your account ended up getting locked or suspended, then head over to the main site without clicking any links inside the email. What will more than likely happen is that you’ll log in and see that your account is fine. Let’s take a look to see if there’s anything else that give this email away as being a scam.

Are There Any Spelling And Grammatical Errors?

There’s usually some kind of grammatical or spelling errors with a lot of the phishing emails that people receive. Every once in a while though, you’ll get some that just won’t have any of those errors and this just happens to be the case with this particular one.

Sometimes you’ll see those type of errors in the email heading, but even that is not present on this one. I’ll have to give the scammers credit because that’s one red flag that did not appear.

The body of the email did not contain any spelling errors and even had the PayPal logo inside of it. There is something though about what was said that immediately let me know that it’s a phishing scam. The body of the email said that they found suspicious activity on credit cards linked to my PayPal account.

I know that’s completely false as I don’t have ANY credit cards linked to my PayPal account so that was a massive red flag for me. Another thing is that they addressed me as Dear Customer. If I’ve got an account with you, you’d think that you would want to address me by my first name. That’s another thing the scammer failed at.

Now let’s get into the meat and potatoes of this whole scam. It’s time to click on the link inside the email and see just what really comes up. Let’s see how close to the real thing this phishing site looks.

What Happened When I Clicked The Link

When I first received this email, I was curious to see where the link inside of it would take me. I wanted to take see if it would take me to a phishing site designed to look like PayPal and sure enough, that’s exactly what happened. It appears I was able to get to where the link was intended before it could be reported and taken down.

The link took me to a page that looks practically identical to PayPal’s actual log in page. It’s down right scary that you really can’t tell the difference from an initial glance. I’ve got pictures of both the phishing site and the PayPal’s site so that you can see an actual comparison of the two and you can see them below. 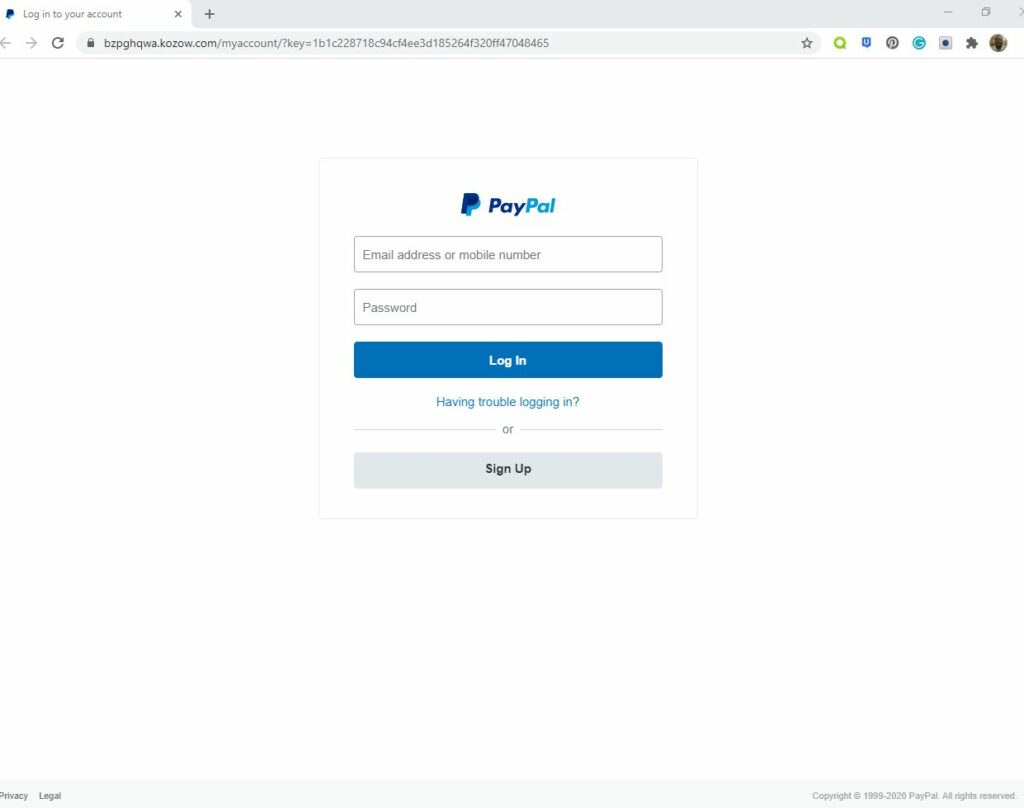 The part where you put in your log in credentials is exactly the same on both sites so there’s no way to tell them apart in that section. Don’t worry though, I will tell you what to look for so you can tell which one is a scam and which one isn’t.

If you look at the very bottom of both pages, there are some small differences. On PayPal’s actual log in page, at the bottom center, you’ll notice what says Contact Us, Privacy, Legal, and Worldwide. The Phishing site has that same stuff listed on the bottom left of the page as well as a Copyright disclaimer on the bottom right.

The best way to tell them apart is to look at the url of both pages. The url of the real sign in page has paypal.com/us/signin. The phishing site though has a very long url that does not resemble PayPal at all. You can see from the picture that it’s a series of letters and then a bunch of long numbers and letters at the end of it.

If you’re ever in doubt as to the authenticity of a website, just look at the url as I did in this case. One you can really tell is from PayPal and the other is definitely a phishing scam because of the weird url. Plus some of the stuff at the bottom of the page is in a different area when compared with PayPal’s page. So what should you do is you get an email like this and get to a website pretending to be from PayPal? I’ll talk about that next.

Most companies have a way to report phishing emails and other scams and PayPal is no different. I have shared in past articles how you can report it to PayPal, but I’m happy to share it again because it’s very important that they know what is going around out there and to keep their customers from becoming victims.

You can visit this page which will have an email address that you can forward PayPal phishing scams to as well as fraudulent websites and you just have to include the url of the fake website when you forward everything to PayPal.

PayPal will sometimes respond back, thanking you for letting them know about the scam email and website and may also offer additional information such as what to do if you did end up falling for the phishing scam and ended up trying to log in with your PayPal information to the fake PayPal website.

If you happen to get a text that claims to be from PayPal and you feel suspicious about it, they provide a number that you forward it to so they can take a look at it and see if it’s a real text from PayPal or a scammer.

It’s very important to share the information that I presented to you, especially an example of a PayPal phishing site, to other people so that they don’t become victims of phishing scams like this one.

There are people who are more vulnerable or susceptible to falling for these kinds of email scams, especially the elderly. They are usually the hardest hit when it comes to email scams and I find it so sad that people want to take advantage of people who generally have worked all their lives for what they have and will do anything to take money away from them even if they don’t have a lot.

I want to protect people from being victims and I even inform my parents, who are now in their 70s, of what’s going on out there when it comes to scams. My mother is far more susceptible to falling for scams than my father is so I really try to reiterate to her that you never give out any of your bank account information as well as social security number to someone you don’t know especially if they’re trying to scare you into thinking something has seriously happened with either one of those things.

Do you know of anyone who became a victim of one of these kinds of phishing scams? Did you personally have to get involved when that happened? Feel free to share your comments below.

Is My Amazon Account Disabled? How To Sell Luxury Watches Online