What is the On My Way App? – My Review

There are a lot of different applications for smartphones these days and there are some that can actually make you money. I haven’t tried a lot of them out, but there are a few that I have given my time to. So what is the On My Way App? Well you’ve come to the right place as I’ll explain exactly what it and if it’s worth your time at all.

This particular app is available for both Android and iPhones so there should be no issue with either camp giving this particular app a try. I will say though that it will always want to have access to your location which is necessary if you want to earn anything from this app. Well without further ado, let’s check out the On My Way App.

Make Money while Driving and NOT Texting

As the header above says, the entire idea of the On My Way App is to make money while driving and NOT texting. They want to prevent people from texting while driving because it certainly is a dangerous trend that has been happening the last 5+ years and the cause of a lot of major accidents.

I personally do what I can to avoid texting while driving because I just don’t want to take my eyes of the road, not even for a split-second. I’m not gonna say I’ve never texted while driving, but these days I certainly don’t participate in that dangerous distraction while on the road.

The idea for getting paid for not texting while you drive is a good thing. I will have to say though that I think the execution of it by this particular company needs some work and I’ll get more into that shortly. It is completely free to download and try out and pretty easy to set up an account.

Now I’m not sure of the entire technology that ‘s in use on the particular app where it can tell that you’re driving and staying away from the texting option on your phone, but I will say that it works pretty well.

The Easiest Way to Make Money…Or is it?

Let’s be honest, who doesn’t mind getting paid to not text while driving? It seems so easy to do just that right? If you download the app, setup your account, get the appropriate settings on your phone so the app works properly, then you’re all set to make money.

You’ll probably be excited when on the home screen you start accumulating money for the first time and it’ll show you your total under where it says On My Way Cash. Let’s say you make $50 of it fairly quickly and then you decide you want to cash out and so you scroll down to see your options for doing that and….see that the way to cash out your earnings is not easy at all. In fact, many people are quick to call it a scam for the simple fact that it’s not easy to cash out your earnings.

Unfortunately, it’ll generally take you a fairly long time cash out unless you decide to use your cash towards one of their special deals with other companies or merchants. Deals such as on sunglasses, t-shirts, wireless earbuds, and a few others. Getting the actual cash though, you’ll have to meet a few requirements which is pretty tough to achieve. 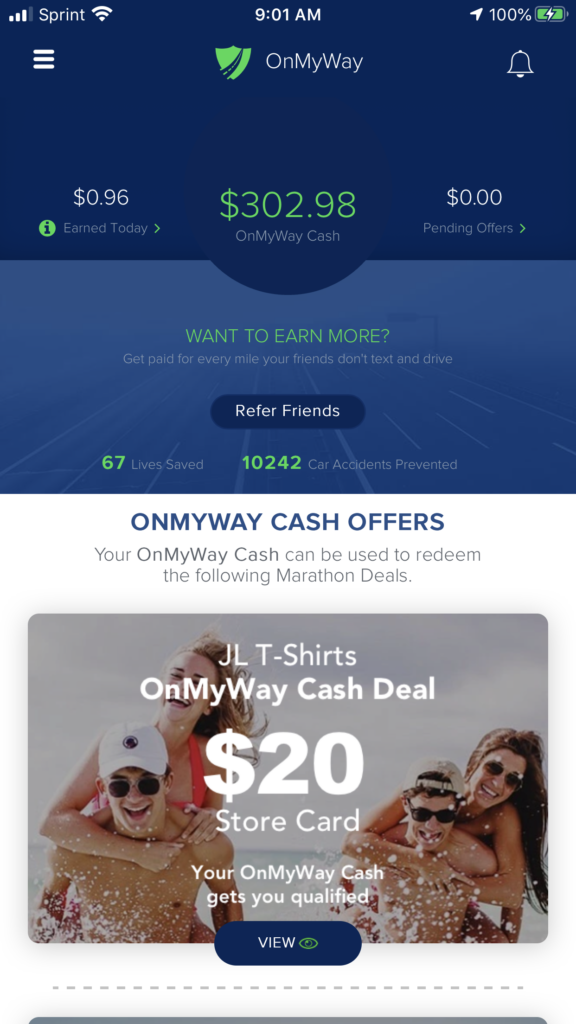 The first one is where you can get $250, but in order for that to happen, you need to refer 250 other people to the app. This is not an easy thing to do. They may initially like the concept, but if it’s very difficult to truly cash out, the people you refer will probably just stop using the app.

The next cash out option is $500, but that is all dependent on the miles you accumulate which is really the amount of On My Way Cash, as well as the number of referrals. You need to refer 50 people and have accumulated $5,000 of On My Way Cash. The referring 50 people part does seem easier than 250, but accumulating $5,000 is going to take quite awhile, but it also is dependent on how much you drive.

Last, but not least, is the $1,000 cash option which I believe is the most difficult one to achieve. With this option, you can cash out a staggering $1,000. The problem though is the requirement to get that cash. You’ll need to have accumulated $10,000 of On My Way Cash just to cash out $1,000. I’m currently nowhere near that as I barely have over $300 and I’ve had the app for at least 6 months. At this rate, it’ll be years before I can even reach half of that requirement.

On My Way App Worth it or Time Waster?

I do like the concept of the On My Way App, and it is completely free to try. Just download the app and don’t text while you drive and that’s it, you don’t have to do anything else. The sad thing is though, if you want to cash out for some actual cash, the requirements are super steep for it which it almost makes it impossible for some. 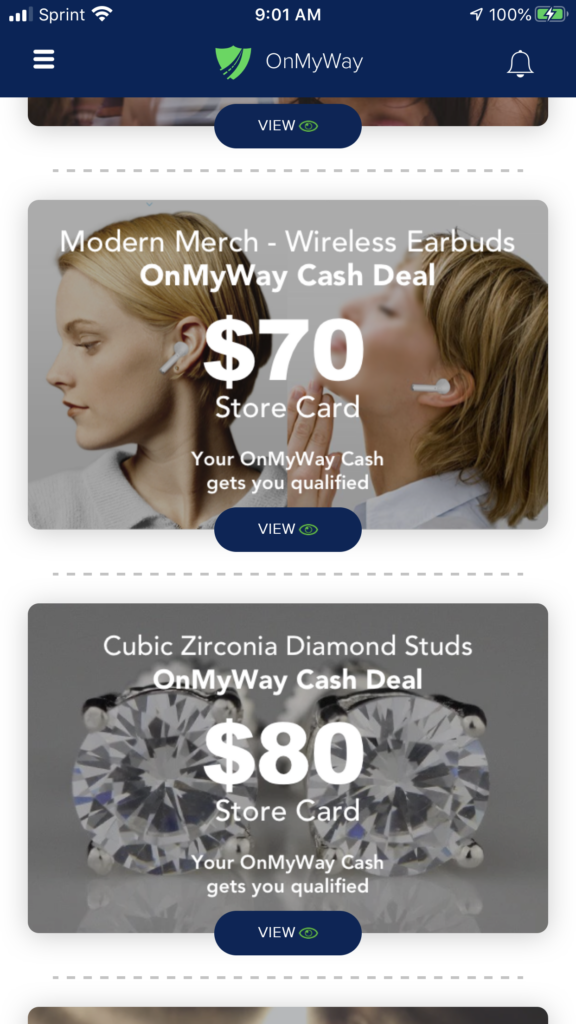 The one that has me interested is the wireless earbuds deal as I have enough to probably a pair of wireless earbuds and spend any of my money. That alone is worth it for me so I probably take full advantage of that soon. As far as cashing out actual money, I don’t ever see that happening for myself. In my honest opinion if you want to earn actual cash, look elsewhere.

Is there a better way to Earn Money?

You bet there is! I’ve reviewed a number of survey sites, some better than others, but you have far better chances of making actual money than the On My Way App. The survey sites are better for making money in the short term and there is one I recommend more than any others as you’re always guaranteed to make money from every survey you take and you can read my review of that particular survey site here.

If you’re looking to make a good amount of money in the long term, as in a full time business, there is a great place to learn how to do just that and get access to the tools to make that happen. Affiliate Marketing is one of the best ways to do that online and you can make a full time that could one do replace your traditional day job.

There are other options out there such as blogging, drop shipping, freelancing, and more and a lot of these offer good money making opportunities. It doesn’t always happens right off the bat as you have to put time and work, and effort in it, but with persistence, it does pay off.

Now if Affiliate Marketing interests you, the place to learn how to create a lucrative online business using this particular method, is called Wealthy Affiliate. It offers all the training and tools needed in order to learn how to create a profitable online business. They’ve been around since 2005 and gotten better and better since then. Go ahead and read my full review of Wealthy Affiliate.

Do not Give Up Making Money Online

Even though I don’t recommend the On My Way App as a good way to make money, there are definitely other ways it can be done as I’ve mentioned above. With things going on in our world today and things seeming less and less certain, you want to reach out and try new things because things in our traditional world are not guaranteed.

Our way of life is rapidly changing right before our ways and it has a lot of us scared. This is the time to start thinking outside of the box and be willing to try new things because there ways you can improve your situation especially your financial situation. I’ve given my examples of other things out there to try, and that I know that work, but don’t hesitate to see what else is out there. I’m willing to help those with any questions or concerns so don’t hesitate to leave your comments and thoughts below.