What Is The Earnin App and Can it Make You Money?

I’m going to be taking a look at a specific type of app for your phone that claims to send you money instantly based on your actual 9 to 5 job. Sounds like kind of an interesting concept doesn’t it?

So what is the Earnin App and can it make you money? The short answer is yes, but it’s more complicated than that and it’s definitely not a long term solution to make a sustainable income. If you are in a pinch though and you need money very quickly, then you’ve come to the right place. Without further ado let’s take a closer look at the Earnin App and how it can help you when you need money in a flash.

Wouldn’t it be nice if there were a way to keep those over draft fees from putting you deeper and deeper into the hole especially if you have unexpected emergencies that come up? It would be nice if you could get access to your paycheck early to be able to have the money when you suddenly need it.

Well this is where the Earnin App comes in. Depending on your income from your job into your bank account, the Earnin app will give you access to money early should you need it and it can also help you when your account starts to get low. There are other apps similar to this, but Earnin is my favorite as you can get more money per day if you need it. Though honestly, in combination with those other apps, they can be a life saver.

How The Earnin App Works

If you decide to give the Earnin App a try, you’ll need to download it on your phone from either the Google Playstore if you have an Android phone or the App Store if you’ve got an iPhone. You’ll then create an account and you’ll have to tie your bank account to the app.

It’s pretty easy to do as there’s a place to input the name of your bank as well as your bank’s routing number and your checking account number. You should also be able to tie your checking account’s debit card to it too which will allow you to have the money sent to your account at a much faster wait instead of the typical 3 – 5 business days. 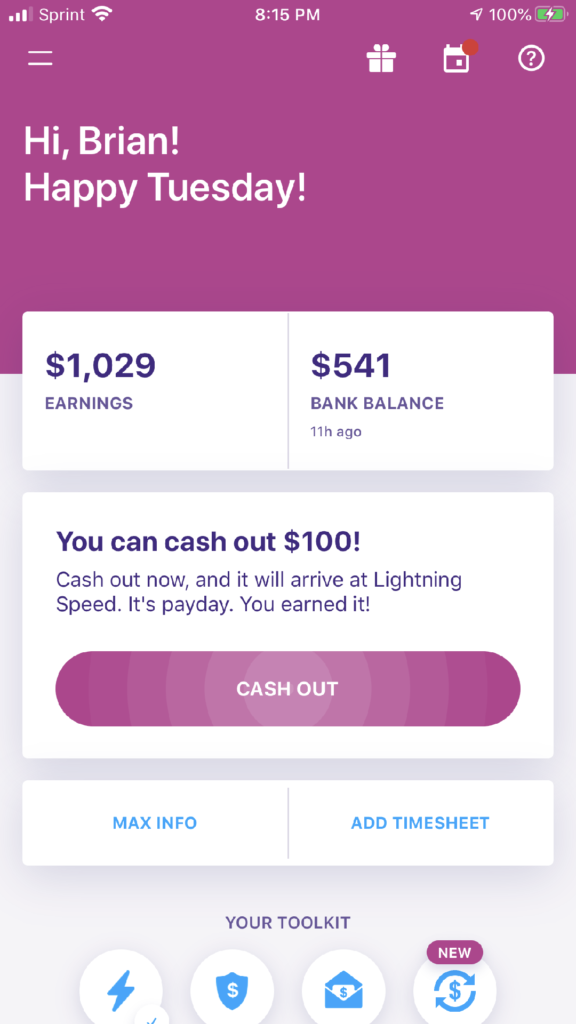 It’ll also ask for your work information, but it should be able to pick that up from your bank account as long as it’s direct deposited in there. You’ll also have to choose how often you get paid which is bi-weekly for me.

After all of that is done, it should be able to calculate your earnings based on the hours you’ve worked at your job for the day. Now I do want to tell you, you’re not going to be able to withdraw a full paycheck each time you decide to use it, but the highest I’ve been able to do is $350. I haven’t withdrawn that all at once as that was the total over multiple days.

When you first start out, it’s unlikely you’ll be able to withdraw an amount that high as you have to build towards that amount. Earnin will be able to see what your current balance is and you can set up alerts to let you know you’re getting dangerously close to over drafting.

What’s really nice is you can set up what’s called a Balance Shield which will protect you by automatically sending you $100 should your bank account fall below $100. I haven’t personally used that feature as I prefer to decide if I really want to send money to my bank account or not. Still, it’s nice to know that feature is there should you decide to use it.

Paying Back the Earnin App

When you decide to send money to your bank account, you should know that you’re going to be paying that back as Earning is pretty much giving you partial access to your paycheck early.

When your regular payday arrives, Earnin will automatically take out of that what you took from them so if you took $150 from them, it will automatically be deducted from your paycheck when it comes in. Something I forgot to mention is that when you request money to be deposited from Earnin, it will ask you for a tip amount. You’re under no obligation to give a tip, but doing so helps keep things at Earnin running the way it is.

The most I’ve ever tipped is $3, but there are times I haven’t tipped anything though I usually try to tip something if I can. Now if you don’t use Earnin very much, they’ll reward you with bigger cash out options should you need it. I believe when you first start out, it’s $100, but like I said earlier, you’ll be able to earn bigger cash out options the longer you keep Earnin on your phone and don’t use it a whole lot like say maybe once or twice a month.

To some people, the Earnin App might seem like a small payday loan, but it is not because there is never any interest charged on the money you get from the app and you always pay back the full amount when your paycheck comes in.

What To Do if the Earnin App is not Enough

Sometimes very unexpected things come up that can be quite costly and you suddenly need money. It’s best to have an emergency fund savings account for such a situation, but if you don’t have one and don’t want to go through payday loans and the Earnin App just doesn’t provide enough money, there is a slight solution.

There are a couple of other similar apps to Earnin that work in much the same way to try to prevent your bank account from getting overdraft fees. If you use those apps in conjunction with the Earnin App, you can sometimes get $200 plus in a single day. Keep in mind though that you’ll have to pay that back to each of the apps you burrowed the money from.

I’ll talk about those particular apps here pretty soon in future articles, but there are a few times I’ve used all three of them for such an emergency situation. It was helpful at the time I needed it, but it was kind of disappointing having to pay all of that back on my regular payday.

I do have to say though that the Earnin App is the best one in my opinion because it offers you the most money to draw into your bank account should you need it and you don’t have to pay a monthly subscription to it. The other two apps I use require a monthly subscription and you can only draw out one specific cash amount one time and can’t do anymore until it’s paid back. One of the apps though does actually let you extend the due date of the payback, but it is only generally under certain circumstances.

The Earnin App is a Short Term Solution

If you were one of those who asked “what is the Earnin App?”, you now know what it is and how it works. Yes, in a way, you can make money from it, but it is only for a short term and specific purpose and you always have to pay that money back. You can take a look at Earnin’s website here.

If you’re looking to make money online and want to scale it up for the long term, you need to look elsewhere because Earnin and apps similar to it, are not designed for that. It is very helpful if you need money in a pinch or about to go into overdraft in your bank account, but that’s all.

For building a long term online business, the best place to do that to where you won’t have to rely on those apps to replenish cash quickly, is a place called Wealthy Affiliate. They give you the training and the tools to create long term and very scalable business and it does work as long as you take action and follow what the training teaches and best of all, it is completely free to try out to see if it’s for you. If you want to know more about Wealthy Affiliate before giving it a try, you can read my full review here.

Can You Make Money With Free Online Classified Ads? Amazon Phishing Email and How to Avoid Becoming a Victim