The Windows Defender Scam Has Hit My Email

Well I will get into that next, but I do also want to mention that scammers will use whatever they can to try to scam you to get money out of you so even if there is something legitimate, scammers will try to use that against you to get your hard-earned money. If you want to read about some of the other phishing email scams that I have received, you can click here and go through my list.

There are a few Microsoft subscriptions that I have, but they are a very low monthly cost and definitely have nothing to do with Windows Defender so I decided to click open the email as it really had me interested to see if I really did place an order for Windows Defender.

After I clicked open the email, I noticed it had a very interesting background almost like something from a greeting card and it said Microsoft Accounts at the top of the email. Right below that it showed a customer ID number, Invoice ID number, my email address, and the date this took place. 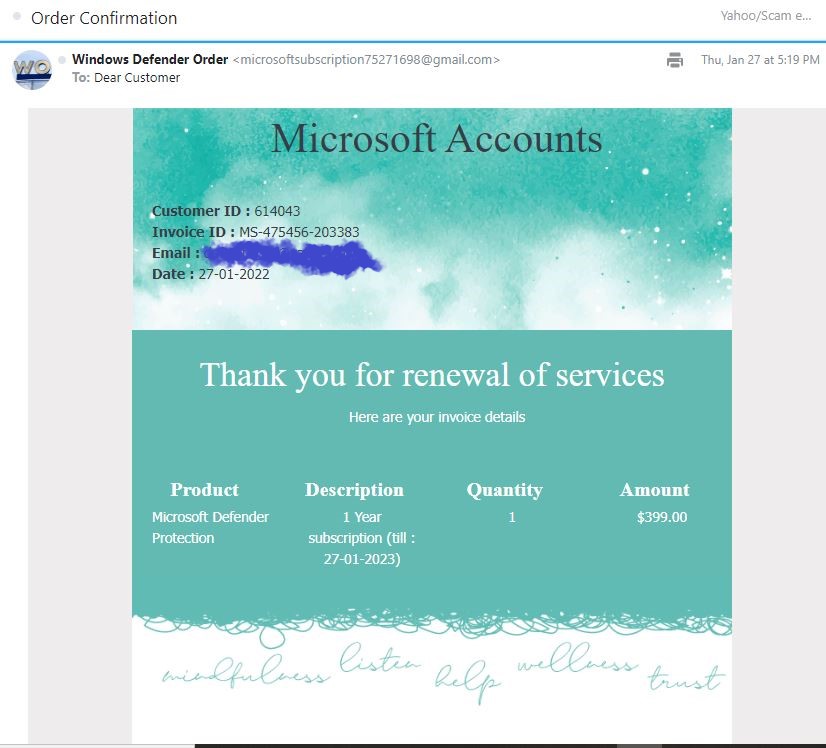 The next thing it showed was a supposed renewal of services, the product that was renewed which it said Microsoft Defender which is the new name for Windows Defender, the quantity and the amount it cost which is $399. Now after seeing the cost of it, a tiny bit of panic set in because I know I did not authorize such a thing, especially for that amount of money.

One of the last things the email said is that if I didn’t make the purchase or want to cancel this subscription, then I need to call a customer service representative at the number they have listed within 72 hours of receiving this particular email. Did I end up calling that number? The answer is most definitely no, and I’ll tell you why.

There are certain things that are wrong with this email. First of all, if I truly have a subscription for this product, why am I not addressed by name, especially my first name? Instead, it says “Dear Customer”. That’s a major red flag that this is not a legitimate email.

Next, the message of the email has some grammatical issues. There appear to be run on sentences which is something a legitimate company would rarely, if ever, do especially a company like Microsoft. Now there are some scammers that have gotten good at eliminating grammatical and spelling errors so it’s important to look for other red flags that would give away an email being a scam.

Something I want to mention is that the phone number that’s listed in the email that they want you to call for customer service is NOT Microsoft. It is a number that if you call will have a scammer answer and will lie and say you’re offered a refund especially since you’ll say you never authorized a subscription. What will then happen is that they’ll want remote access to your computer and want you to log into your online banking. Next they’ll supposedly get a program open where they want you to type in the refund amount you’re supposed to be getting back, but then they’ll make it seem like you made a mistake and typed in too high of an amount, say into the thousands of dollars.

It will look like thousands of dollars has been transferred to your bank account in error, but it really hasn’t. What the scammer has done is changed HTML code in the background to make it look like too much money was put into your account. What they’ll want to do now is to get that money back as the scammer will more than likely say he/she will lose their job unless the money is given back and that you will need to go to a store to purchase gift cards in order to give the money back to them.

NEVER fall for this. You don’t ever buy gift cards are give in to their demands because you will truly lose money in some fashion if you do this. The best thing to do is hang up and ignore their calls or try to block their number as they will try to call you back to get you to fall for their scam.

Who it Affects The Most

This type of scam can affect anyone, but the people that these scammers try to go after the most are the elderly or those that are not as familiar with today’s technology. It’s sad that scammers do this and a recent report came out saying that in 2021, scammers that target social media alone made over $770 million.

Lots of people lost their hard-earned money and phishing email scams is just another way that scammers target people. It’s very easy to fall for these scams if you don’t know what to look for. These type of scammers are trying to cause worry, panic, and alarm so that you won’t be thinking clearly and are desperate to stop a transaction you didn’t authorize and so they either want you to click a link or call a number. 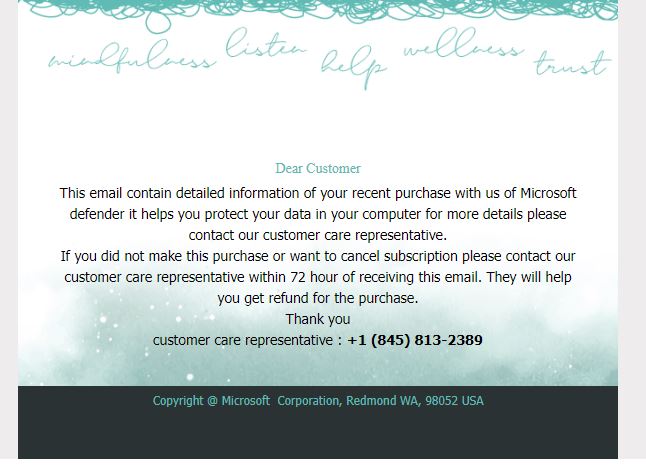 In the case of the email that I received, they want you to call the number in the message of the email. I of course will do no such thing as I know it is not really Microsoft on the other end of the line even though they will claim it is. Now while it seems like this might be common sense that this is a scam, there are many who fall for this, otherwise, scammers would not continuously use this method.

I work at a financial institution and it does sadden me how many people call about these type of scams, worried that something has come out of their accounts when it really hasn’t and I have to ask them if they have initiated contact in any way, by calling a phone number or clicking any links in the email. There have been a few instances where customers have unfortunately made contact with the scammers and given them access to their computer as well as their online banking. In this instance, it is in the customer’s best interest to shut down their account immediately and open a new one before the scammers can do damage and possibly take their money.

If you know anyone who could be susceptible to these type of scams, please share this information with them as soon as possible so that any financial damage can be prevented. There is a channel on YouTube called kitboga where he creates videos specifically calling scammers. While his videos are funny, you do get to see how these scammers actually work and he does inform you what they are doing on your computer once they are given access. His deal though is that he purposely wastes the scammers time and even frustrates them so that they are not scamming other people. I will post a link to that channel down below.

The Windows Defender Scam can happen anywhere, as in anywhere that you can access an email account. These type of scams happen all over the world from the US, to Canada, the UK, Australia, and even places such as Japan and other parts of Europe.

Another thing to be aware of is that similar scams can happen on your smartphone. A lot of times you’ll get a text from an unknown number and it might say something along the lines of a purchase that has happened or a subscription that has been renewed for x amount of dollars and if it’s something that you didn’t authorize, they’ll either want you to click a link that’s in that text or call a number.

You do not want to click the link or call that number because just like in the email, you’ll either be taken to a fraudulent website from that link, or will be talking to a scammer if you decide to call that number. Always be cautious and if you’re worried that something might have come out of your account that you didn’t authorize, always go and check your mobile banking or call your bank. What you’ll more than likely see is that no charges came out of your account.

I’m not sure if there are certain regions of a country that are more susceptible to these type of scams, but as far as age groups, it seems to be that the older you are, the more likely it is to fall for these phishing scams though I’ve seen people in their 20s and 30s fall for them too, just not as much. Regardless of your age, it’s always best to keep your guard up to these kinds of emails or even text messages you might receive on your phone.

How Best to Avoid Being Scammed

The best ways to avoid the Windows Defender Scam is to pay attention to any red flags that might be present in the email. I did mention some of those earlier such as grammatical and spelling errors, addressing you as “Dear Customer” instead of your actual name, and the biggest one of all, the email address it came from.

I’ve said it before and I’ll say it again, checking the email address of an email will always be the best way to determine whether an email is legitimate or not. That is something that scammers cannot fully hide as of this time. Generally, if an email is from a legitimate company, it will usually contain @microsoft.com, @amazon.com, @paypal.com, etc.

The email address that I talked about earlier does contain microsoft in it, however, it does not end with an @microsoft.com prefix which is important so that’s why you have to be really careful here. If you continue on with the rest of the email address, you’ll see that it has a series of numbers and then ends with @gmail.com. No company is going to use a 3rd party email service such as that so that is a signal that the email is a scam. 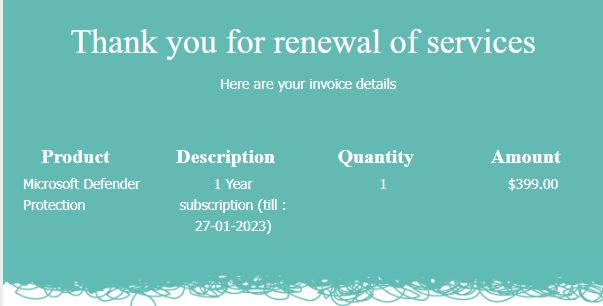 What do you do now that you know an email is a scam? You can do one of two things. You can either delete it, or you can forward it on to the actual company that the email says it’s from. Microsoft has a specific email address that you can forward these type of phishing scams to so that way they are aware of what’s out there and can shut them down. The FTC also has a place on their website where you can report phishing emails as well.

Something else to keep in mind too is that Microsoft Defender is a legitimate program, but it is completely FREE and is included with the latest versions of Windows so you will never have to worry about a paying subscription. That should give you relief knowing that it is something you don’t have to pay so now it makes it so much easier to spot a Windows Defender scam.

Now, as promised, here is a link to Kitboga’s YouTube channel. His videos are funny, but there is also a seriousness to them because you truly see how scammers operate and how they try to convince you to get them gift cards or access to your bank account. It really is an eye-opener to see how these scammers prey on people trying to steal their hard-earned money.

An IRS Scammer tries to strike! The OLSP System and its Updated Bootcamp