I got an interesting email the other day that says the New York State Supreme Court discovered a transaction that happened between myself and the United Bank of Africa Benin Republic Cotonou Unit and upon investigation, the court has decided that I’m the real beneficiary. $4.5 million was forwarded to the NY Supreme Court after an investigation by the FBI as well as Homeland Securities, and DC Police and they have all mandated that the court will pay me the funds and the Federal Reserve Bank of New York will be responsible for the transfer of funds from bank to bank. Wow, how exciting is this?! This must be legitimate right?!

What’s Wrong With This Email?

There are so many things wrong with this email that it’s hard to take anything this email says, seriously. First of all, why would you have the subject line as just Hello? If this is supposed to be a legitimate email from a state supreme court, that makes absolutely no sense.

When I open up the rest of the email, just a simple first glance of it makes me realize that this is EASILY a scam email. The entire email is in all caps which something that is written in all caps means you are either yelling or trying to get your attention as quickly as possible.

It’s so laughable that they say I’m due to receive $4.5 million because their so called investigations say that I’m the real beneficiary of a bank out of Africa. I do have to ask the question though, how do they know that I’m truly the beneficiary of this supposed money when the email never ever mentions my name? They don’t mention my first name, where I possibly live or anything. How do they even know that I’m supposed to receive anything if they can’t even provide that basic information? 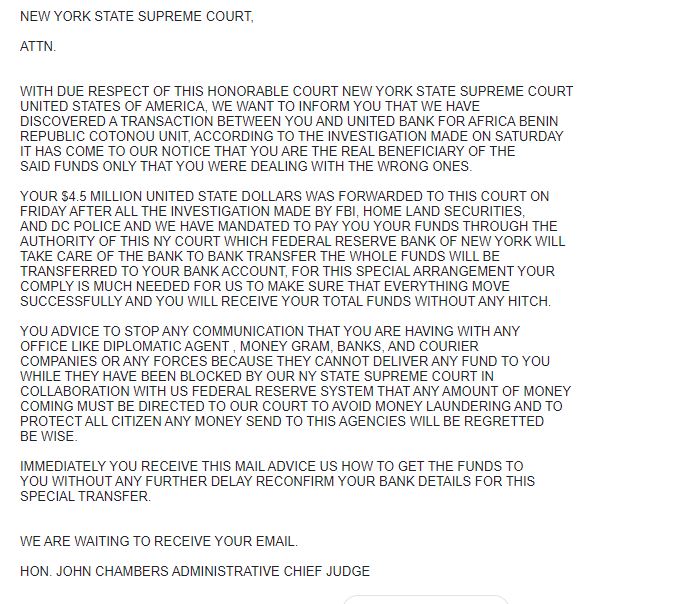 One of the last questions I have to ask is this: Why would the New York State Supreme Court have anything to do with this considering I live nowhere near the state of New York? I live in a great plains state so if this email were truly legitimate, I would think that my state’s supreme would be involved in this (though honestly I don’t see why ANY state supreme court would get involved in such a ludicrous and obviously false investigation). Are there any other things that give this email away to it being a scam?

It’s very important that you check the email address first as it will usually indicate more than anything else if an email will be legitimate or not. In a lot of my past articles I talk about other email scams that claim to be from places such as Microsoft, PayPal, Netflix, Amazon, Apple, and more. In most of those cases, those emails try to make it seem like something is wrong with your account with them and that you need to take immediate action in order to fix the issue or reactivate your account.

In all those cases, I talk about and show the email address that those emails came from and they are not from those legitimate companies even though some try to disguise it and make it look like they are. Scammers are trying really hard to mimic PayPal and at first glance it does look like it’s legitimate as they try to cloak it by using the service@paypal.com email address, but when you actually open the email and take a closer look at the actual email address it came from, you’ll be able to easily tell that it truly is not from service@paypal.com.

While this email scam is different from the ones I mentioned above, the same rules still apply for determining whether an email is a scam or not. Another thing that can make email scams more noticeable are spelling and grammar errors. Some email scams are absolutely riddled with them while others are especially good at making sure none of those errors appear. I have received emails that contain no errors and so that’s where other things come into play. As for this particular email, all of it is in capital letters and actually makes it hard to read and so this makes it a dead giveaway that this email claiming to be from the New York State Supreme Court is a scam. The question now becomes, why do I and others get these particular emails and what is their true purpose?

The Purpose of These Email Scams.

This particular email scam that I received is designed to produce positive and exciting emotions, so much so that the hope is you won’t be thinking logically. They want you to think you’re going to be receiving a large sum of money and so when they ask for certain things in order for you to receive that money, the scammer or scammers hope is that you’ll willingly give it to them without any second thoughts.

What things will they be asking for? It depends. Some scams will ask you for your social, your address, your phone number, your driver’s license or even in some rare cases, your place of employment. Other times, they might want you to send out some money in order to receive the supposed large amount of money they’ve promised you. I’ve actually got an example of that which you can read by clicking here.

Sometimes they’ll have a phone number they’ll want you to call in order to confirm details that you are the person that’s supposed to receive millions of dollars. Well, I’m here to tell you NOT do any of those things! You’ll be giving the scammers all of your personal info and then the real damage will happen which can include identity theft, access to bank accounts and even more. 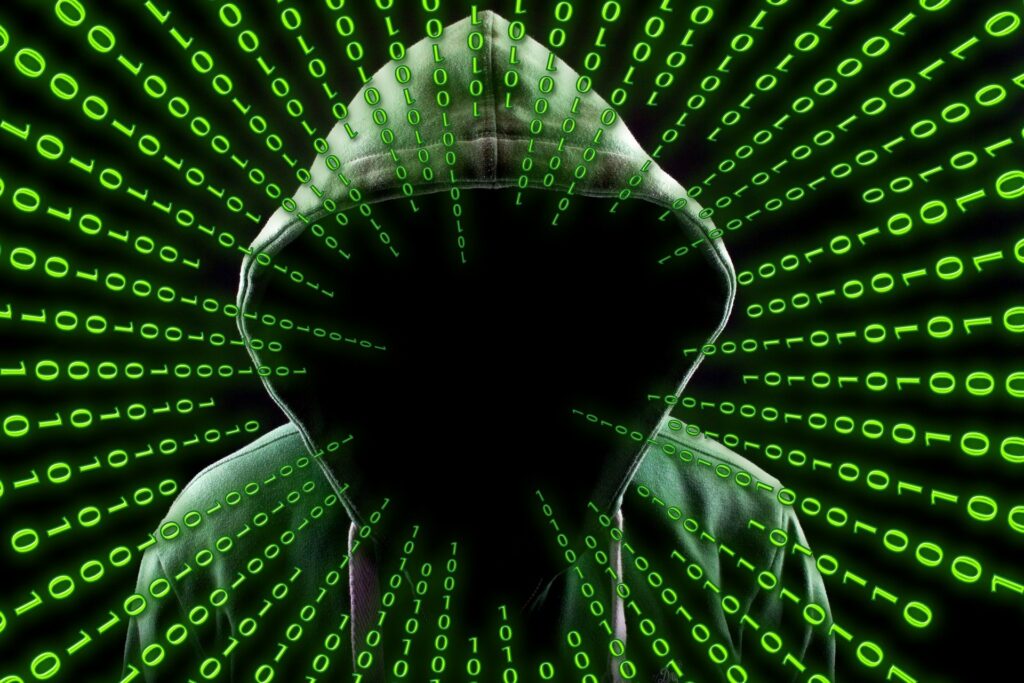 You have to think logically here. What did you ever do to deserve such a supposed large amount of money and how come they don’t address you by name? Some of these scams have said that I’ve helped with investigations and that I will get a large sum of money for my efforts, but I know that I’ve never helped with any kind of investigation that would warrant such a thing.

Sometimes you’ll get a scam saying that your email address was chosen for some special lottery and I know that’s fake because I never used it to sign up for any kind of lottery online. If I play any kind of lottery, it’ll be my state’s lottery and I buy those tickets from either my local grocery store or convenience store. Now that you know what the purpose of these particular scams are, the question you’ll want to ask next is what do you do when you receive one of these emails and know it’s a scam?

The Best Thing To Do if You Receive an Email Scam

So now you know how to spot an email scam such as the one that I received, but you’re not sure what to do when you receive one or multiple emails. There are one of two things you can do. You can either delete them or forward them on to a place to report them such as the FTC or even your state’s attorney general’s office via their website.

There’s really not much more to it. The scammers can’t do anything if you delete the emails and there’s always a chance they could be discovered and shut down if you decide to ultimately report them which is a good thing.

If you do happen to fall for one of these scams and you do become a victim whether it be identity theft or breach of other things such as your bank account or even your social security, you’ll definitely want to save the email so you can show it to the proper people to try and prevent further damage.

I mentioned earlier other type of email scams claiming to be from places like PayPal and Netflix. Those companies actually have an email address you can forward those email scams to so that they can get them shut down as quickly as possible because they don’t want any of their customers to become a victim.

Now that you’ve seen my crazy email and know without a shadow of a doubt that it is not from the New York State Supreme Court, you now know what to look for in these type of email scams. It’s so ludicrous to think that a bank out of Africa has named me a beneficiary of money when they don’t even know who I am.

When I first saw this email, I just had to laugh because of how dumb it sounded to me and also for the fact that the entire email is completely capitalized. Trust me, I felt no emotion of suddenly coming into a windfall of money because I know it is completely fake. I will have to say though that this email is a little interesting because normally they either leave a number to contact them or even a website link to click on. This one is just simply waiting for a reply email.

Needless to say I’m not going to reply because it’s dumb and pointless since I know it is a complete scam. Almost all the red flags I’ve mentioned in scam emails are present in this particular one. I’ve learned over the years not to get excited whenever I see an email like this because I’m not going to get millions of dollars just like that.

Sadly it’s easy for scammers to get a hold of email addresses and send out these scams, but that doesn’t mean you have to fall for them. Don’t let your emotions get the best of you and think logically and look for red flags. If you do all of those things you’ll avoid falling prey to an email scam.

ATM Mastercard and Other Scams What is Get Response and is it a Money Maker?